The Story of Sgt. Stubby is Moving to the Big Screen!

The Armed Services YMCA is excited to announce the upcoming Sgt. Stubby movie, coming Spring 2018! Our friends at Fun Academy have been doing an incredible job making this iconic WWI hero come to life on the big screen! The film is based on the true story of a friendship between a stray dog and a soldier that takes place during America's entrance into World War I. Make sure you mark you calendars, this is a movie that you and the kids won't want to miss! You'll be sure to fall in love with this amazing story of an incredible dog and friendship!

The History Behind Sgt. Stubby & the ASYMCA During World War I, Sergeant Stubby was a stray pit bull mutt who one day happened upon the 102nd Infantry Regiment as they were training at Yale University. He was soon accepted by the soldiers, who trained him to fall into line with ranks, participate in drills, and was even taught to salute with his right paw. Stubby eventually bonded with Private Robert Conroy, who managed to sneak him aboard the ship taking their regiment to France. Shortly after their arrival, Stubby was discovered by the regiment's commanding officer, who after a sincere appeal from Private Conroy and a quick salute from Stubby, made Stubby the official mascot of their unit. Stubby spent a year and a half in Europe and became a national hero. Newspapers all around America recounted his incredible feats. One of his particularly noteworthy deeds was the capture of a German spy just outside of the unit's base camp. The commanding officer was reportedly so impressed with Stubby's accomplishment that he "promoted" him to Sergeant.

During World War I, Sgt. Stubby wasn't the only one doing great things. At this time the Armed Services YMCA operated under the name YMCA. When the United States went to war in 1917, the YMCA was quick to mobilize on the home front and overseas to support the troops. Such an endeavor had never been accomplished by any organization, but the YMCA was able to conduct 90 percent of the welfare work throughout the duration of the war. The YMCA initiated several ambitious projects, such as the USO, educational scholarships for veterans, and introduced the concept of rest and relaxation for weary personnel.

After Sgt. Stubby returned from the war, he was decorated with numerous awards, medals, and received several memberships to various organizations. One such membership was a lifetime YMCA membership card, which stated that it was, "Good for three bones a day and a place to sleep." Sgt. Stubby lived out the rest of his life as an American icon and hero, until he passed away at the age of 10.

Sgt. Stubby is scheduled to air in theaters in April 2018! Bring your kids or grandkids to see a wonderful historical animated film! You and the children will fall in love with a story about a little dog with a big heart and a soldier who finds a friend in the most unlikely of places. As an added bonus, you'll learn about World War I while you watch! Remember to check back with us for more Sgt. Stubby updates! 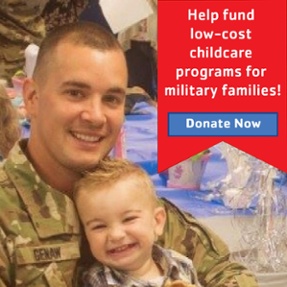 The Armed Services YMCA is thrilled to announce Justin Constantine as inspirational ...
Start Reading
Aug 8, 2017 9:38:15 AM

Angels of the Battlefield Awards Gala to Honor Military Medics

American Airlines partnered with the Armed Services YMCA to fly soldiers to the Lockheed ...
Start Reading